Biosynthesis, Metabolism and Detection of NAD

Biosynthesis, Metabolism and Detection of NAD

Biological properties and biosynthesis of NAD+

Together, NAD+, NADP, NADH and NADPH play a key role in the energy metabolism of cells as acceptors and donors of hydrides. As with many phosphorylation products, NAD+ is produced by de novo synthesis of a number of smaller units. The catabolism of NAD+ was once thought to be a non-specific process. It is now recognized that NAD+ catabolism is closely linked to signals controlling cellular gene expression both inside and outside the cell, Ca2+ activation, and apoptosis.

Studies have shown that tryptophan is a precursor to NAD+ in vertebrates and almost all eukaryotes. People with a tryptophan-deficient diet are at risk for pellagra unless their diet contains sufficient amounts of the NAD+ precursors niacinamide (Nam) and niacin.

Tryptophan is converted to nicotinic acid mononucleotide (NaMN) by the action of a series of enzymes such as griboamyl dioxygenase or tryptophan dioxygenase, etc. NaMN, like nicotinamide mononucleotide (NMN), is converted to nicotinic acid adenine coenzyme l (NaAD) after adenylation by nicotinamide mononucleotide adenyl (group) transferase (Nmnats). NaAD relies on the action of NAD+ glutamine synthetase (Nadsyn1) to convert to NAD+. NAD+ digestive enzymes can break the force between Nam and ADP-ribose groups within the NAD+ structure to produce Nam. Nam, Na, and nicotinamide riboside (NR) are present in our daily diet. Nam can be generated in the presence of pre-B-cell clonogenic enhancer factor (PBEF). Na can be generated via bacterial degradation pathways in the presence of phosphoribosyltransferase (Naprt). NR generates NaMN in the presence of nikamide inosine kinases (Nrk1 and Nrk2). Na and Nam are eventually converted to nicotinic acid and N-methylnicotinamide in the body and excreted. Because the substances controlling the 2 remedial nicotinic acid synthesis pathways are encoded by different genes, the expression of the 2 substances varies in all vertebrate tissues. 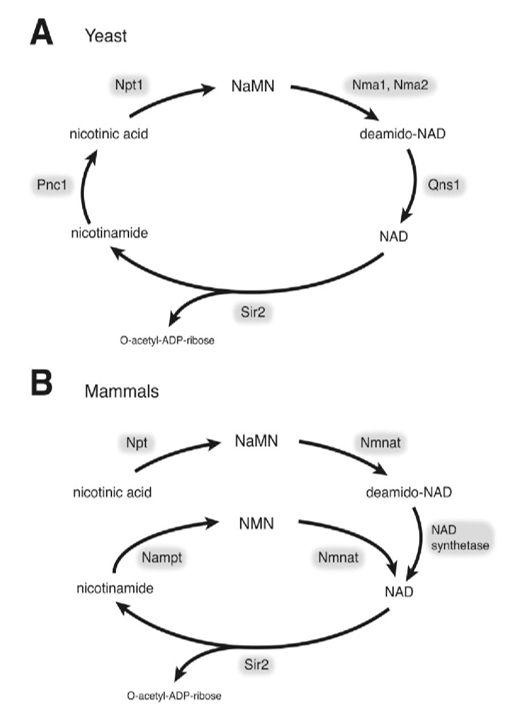 NAD+ digestive enzymes can be inhibited by Nam. ART, PARP, CD38 and Sirtuins each have a Nam site that binds to their substrates and enzyme intermediates. Each of these enzymes can be inhibited by Nam through inter-substrate base exchange. The presence of Nam in vivo is critical for NAD+ metabolism because of the different inhibition products. Nam in fungi and many bacteria can be used to synthesize Na, but the lack of genes encoding nicotinamide enzymes in vertebrate chromosomes prevents humans from using this pathway for Na synthesis (unless symbiotic bacteria in the host GI tract can help).

A gene for Nam N-methyltransferase, which is different from fungal but can convert Nam to N-methylnicotinamide in vitro, is present in humans. Moreover, a homologue of an influenza virus gene expressed in humans has Nam phosphoribosyltransferase activity, which was confirmed in a peptide called PBFE.

PBFE in the cell can promote the synthesis of NAD+, which has a protective effect on the cell. The extracellular PBEF also has two activities: 1. This polypeptide can cooperate with stem cell factor and interleukin to promote the formation of B cell precursor colony PS; 2. It has Visfatin activity. Visfatin is a newly discovered adipocytokine secreted by visceral adipocytes that binds to and activates the non-insulin binding site of the insulin receptor, activating the insulin receptor signaling pathway, thereby mimicking insulin action and lowering body glucose. This factor can also promote the differentiation, synthesis and accumulation of adipose tissue. Visfatin cDNA sequence is identical to PBEF. Visfatin also functions intracellularly as a nikosphoribosyltransferase (Nampt), which regulates NAD+ production and thus Sirt1 activity, and is involved in cell proliferation, differentiation and regulation of cell death. To some extent, PBEF has a role in alleviating Nam-mediated inhibition of extracellular NAD* digesting enzymes and participates in the process of NAD+ biosynthesis cycle partially outside the cell.

Extracellular NAD+ in vertebrates originates from cytolysis and translocation of gap junction protein 43 across the cell membrane. NAD+ acts via CD38 to generate Nam and cADP-ribose. PBEF is capable of converting extracellular Nam to NMN when pyrophosphate (PRPP) is sufficient. CD73, an extracellular enzyme homologous to NadN, the NMN nucleotidase of influenza H virus, converts NMN to NR. 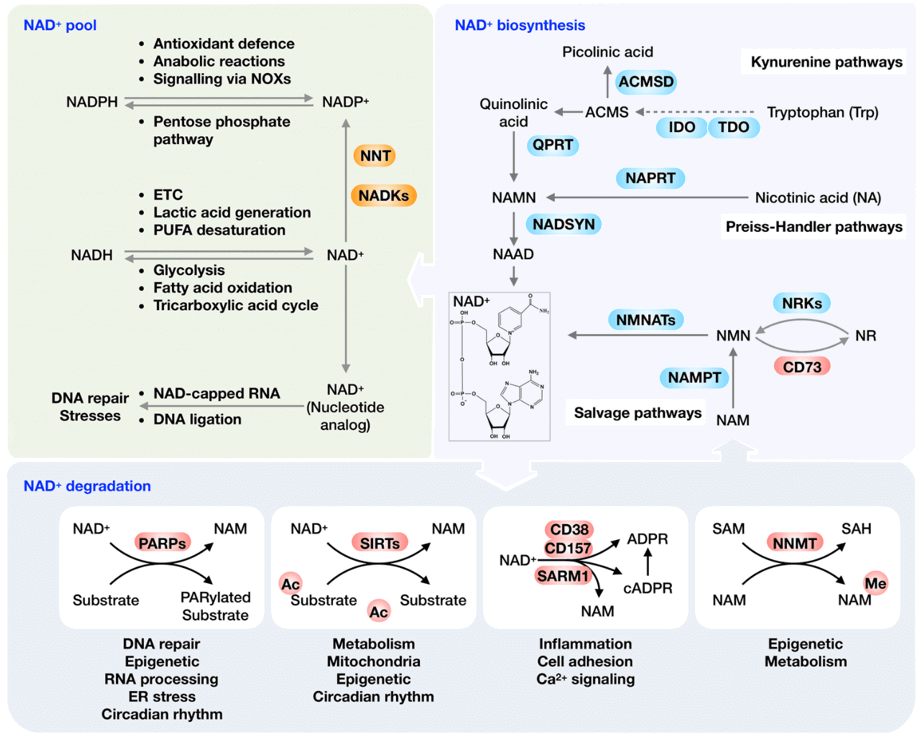