Metabolism and Detection of Arachidonic Acid

Metabolism and Detection of Arachidonic Acid

Arachidonic acid (AA) is an important essential fatty acid and the most abundant and widely distributed polyunsaturated fatty acid in human body, which is of great significance in maintaining the structure and function of cell membranes of the body. At present, arachidonic acid is widely used in health food, cosmetics and medicine.

Arachidonic acid is a 20-carbon unsaturated fatty acid, the majority of which is bound in cell membrane phospholipids, and the concentration of free AA inside and outside the cell is very low. When the cell membrane is stimulated by certain stimuli (such as inflammatory stimuli), membrane phospholipids are catalyzed by phospholipase A2 and phospholipase C system to hydrolyze and release AA, which is oxidized into different metabolites by two pathways: cyclooxygenase (COX) and lipoxygenase (LOX). 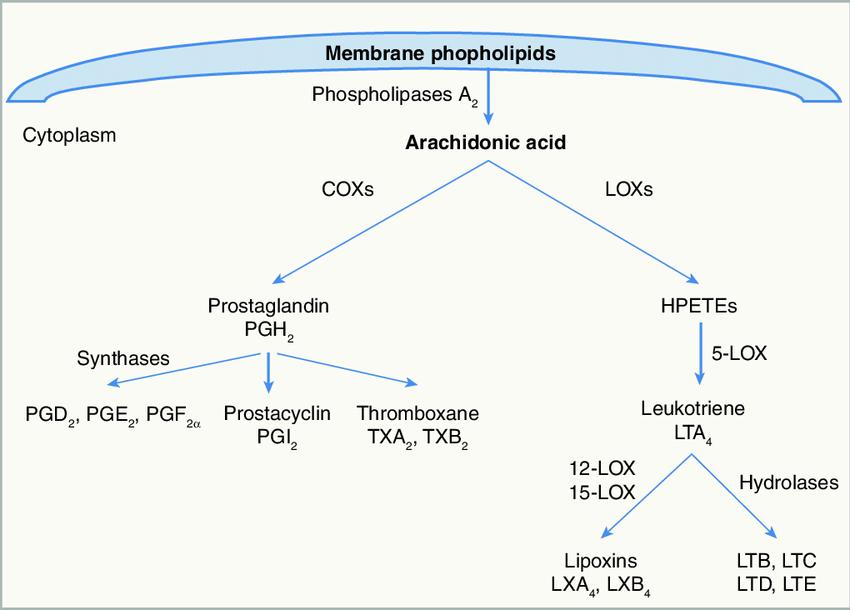 Role of metabolites of the cyclooxygenase pathway:

Prostaglandins (PG) are synthesized by a variety of mammalian cells, except for erythrocytes. PG is generally not stored intracellularly, but is only synthesized and released in response to some stimulus.

During the metabolism of AA, the generation of PG is accompanied by the production of various oxygen radicals, including superoxide ions, hydroxyl radicals, epoxide radicals and hydrogen peroxide, all of which can cause tissue damage.

PGE1 and PG2 do not cause pain but sensitize pain perception.

AA is first formed into unstable hydroperoxyeicosatetraenes (HPETE) by lipoxygenase action. 5-Lipoxygenase is the main metabolic enzyme for the production of leukotrienes (LTs). Unlike cyclooxygenases, 5-lipoxygenases are found only in neutrophils, basophils, eosinophils, monocytes and some mast cells. The 5-HPETE formed by the action of 5-lipoxygenase is first converted to the unstable LTA4, and then further converted to LTB4 or LTC4 sulfated polypeptide, which can be progressively metabolized by a series of transpeptidases to LTD4, LTE4, and LTF4 sulfated polypeptide. LTB4 is mainly produced by neutrophils. Monocytes and macrophages produce LTB4 and LTC4, while basophils, eosinophils and some mast cells mainly produce leukotriene sulfated polypeptides. In platelets, AA is acted upon by 12-lipoxygenase to form 12-HPETE, which is further broken down to 12-hydroxyeicosatetraenoic acid (12-HETE). In addition, 15-lipoxygenase converts AA to 15-HPETE, which is further converted to 15-HETE and trihydroxyeicosatetraenoic acid. 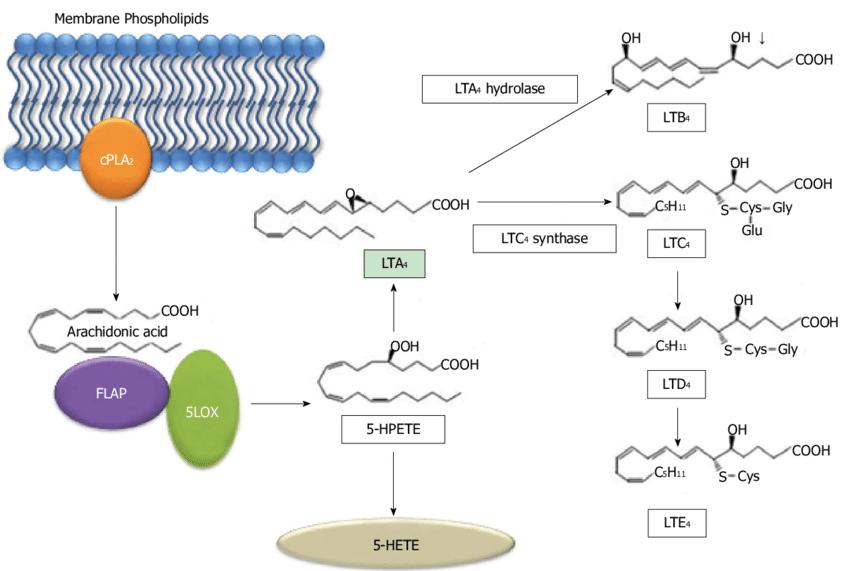 Leukotrienes enhance vascular permeability and cause edema at the site of inflammation.

LTB4, C4, D4, and E4 all cause increased capillary and subsequent microvascular exudation.

LTB4 has strong chemotactic effects on neutrophils, monocytes and eosinophils, causing leukocytes, especially neutrophils, to accumulate at the site of inflammation, promoting leukocyte adhesion to capillaries and microvascular endothelium, and accelerating leukocyte leakage across the postcapillary venous wall.

Arachidonic acid metabolites are biomarkers for a variety of diseases, and accurate qualitative and quantitative analysis is of great value in studying the development mechanism, diagnosis and prediction of related diseases. Currently, four major classes of AA metabolites have been identified: prostaglandins, thromboxanes, leukotrienes, and hydroxy fatty acids.

Since the majority of AA metabolites are present at extremely low levels in biological samples, they cannot be accurately characterized and quantified by conventional detection techniques. With the development of technology, liquid chromatography-mass spectrometry (LC-MS) analytical techniques have shown great advantages in the detection and analysis of endogenous small molecules, as demonstrated by the powerful qualitative and quantitative capabilities of high-resolution time-of-flight mass spectrometry (Q-TofMS) and triple quadrupole linear ion trap mass spectrometry (Q-TrapMS), respectively.