Principle and Structure of Gas Chromatograph

Principle and Structure of Gas Chromatograph

Therefore, under the same driving force, the retention time of different components in the stationary phase is longer or shorter, so that they flow out from the stationary phase in sequential order. This technique of obtaining separation of components in a mixture by the principle of two-phase partition is called chromatographic separation technique.

In gas chromatography (GC), the mobile phase is a gas and the stationary phase can be a solid (solid-liquid GC) or an immobile liquid high polymer (liquid-gas GC). Of these two types of GC, liquid-gas GC is far more commonly used than solid-gas GC. 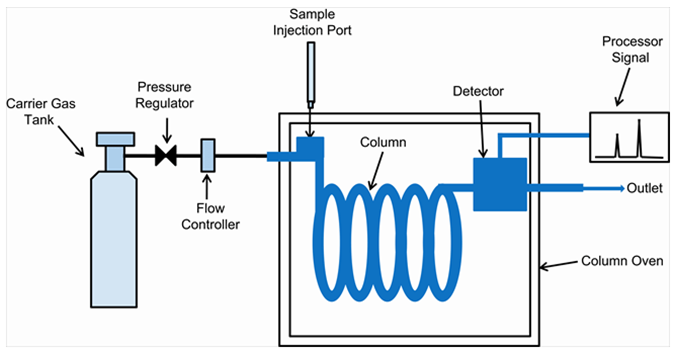 Schematic diagram of the main components of a gas chromatography system (Philadelphia College of Pharmacy, 2012)

Structure of the Gas Chromatograph

① Manual microsampler: It can extract gas or liquid samples, and is suitable for gas chromatographs with manual injection.

② Solid-phase microextraction injector: It can be used to extract organic matter in liquid or gas matrix. The extracted sample can be injected directly into the vaporization chamber of the gas chromatograph for thermal resolution and vaporization, and then into the column for analysis. This technology is suitable for the analysis of organic matter in water or some volatile components in other samples.

③ Liquid autosampler: It can realize automatic operation, reduce human injection errors and manual operation costs, and is suitable for the analysis of batch samples.

a. Gas injection valve: Gas samples are injected by valve, which not only has good quantitative repeatability, but also can be isolated from the ambient air to avoid the contamination of air on the samples. It can also be combined with multiple columns and valves, which can perform some special analysis.

⑧ Thermal cracker injection system: theoretically, it can be applied to any organic compounds that cannot be separated and analyzed yet by gas chromatograph due to poor volatility, but currently it is mainly used for the analysis of polymers.

TCD is a concentration-based detector, i.e., the response value of the detector is proportional to the concentration of the component in the carrier gas. Its basic principle is based on the fact that different substances have different thermal conductivity coefficients and respond to almost all substances, making it the most widely used general-purpose detector.

Since the sample is not destroyed during the detection process, it can be used for preparation and other coupled identification techniques.

The FID uses the chemical ionization of organic substances in the presence of a hydrogen flame to form a stream of ions, which is detected by measuring the intensity of the stream. This detector is commonly used for the detection of organic compounds because of its high sensitivity, wide linear range, undemanding operating conditions, low noise, and small dead volume.

However, the sample is destroyed during detection, and generally only those organic compounds that burn in the hydrogen flame to produce a large number of positive carbon ions can be detected. 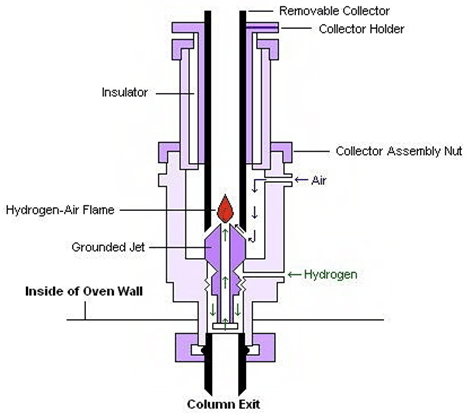 ECD uses the ability of electronegative substances to capture electrons and detects them by measuring electron flow. ECD is characterized by high sensitivity and good selectivity.

It is an exclusive type detector and is currently the most effective detector for the analysis of trace electronegative organic compounds. The stronger the electronegativity of the element, the higher the detector sensitivity. It has a high response for compounds containing halogens, sulfur, oxygen, carbonyl, amino, etc.

It can be used as a carrier gas of nitrogen or argon, the most commonly used is high purity nitrogen.

FPD has a relatively high sensitivity and selectivity for compounds containing sulfur and phosphorus. The detection principle is that when phosphorus- and sulfur-containing substances burn in a hydrogen-rich flame, they emit spectra with characteristics, respectively, through an interference filter, and the intensity of the characteristic light is measured with a photomultiplier tube.

Creative Proteomics offers metabolomics services in a wide range of applications based on gas chromatography technology. If you would like more detailed information, please feel free to contact us.